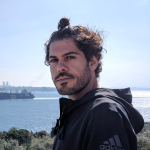 Hey fellow makers!    A few weeks ago I decided to start yet another project 😅 As opposed to my other projects, I wanted to build and ship something fast and I had a nice idea for it.    I really enjoy watching talks, no matter if it's a TED talk about productivity, or a technical talk from a big conference. And I've also wanted to give a talk someday but I don't see myself in a conference stage (or at least not yet...). So I thought I could build something around that idea.    A site where people can share and find talks that may not fit into a big conference. Focused on quick talks of around 30mins and for small audiences. A few weeks later than I expected I have a first version live: quicktalks.io    I've scheduled the first talk in which I'll explain the tech stack I used and why, a few tips for building an MVP fast and some mistakes I made so you don't make them 😅 . If you're interested, you can register to attend here    And if you have an idea for a talk, don't be shy a schedule one! Try QuickTalks and let me know how it goes.    See you around!  ✌️